In this issue:
· B2 Modulates Atlantic Yards
· Brooklyn Navy Yard Expands its Illustrious History
· Center for Mathematics Advances Brown University
· New Museum Nestles into its Utah Environment
· Kigutu Builds Sustainably Off the Grid
· A Tower Rises in the East 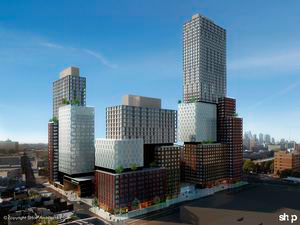 Forest City Ratner recently unveiled SHoP’s design for three new residential towers that are envisioned to cradle the Barclays Center at Atlantic Yards in Brooklyn. Located along the southern and eastern elevations of the arena site, the buildings will provide approximately 1,500 units of new residential housing. B2, the first of the towers, will also be the largest modular building in the world, with 930 modules. The 340,000-square-foot, 32-story building will contain approximately 350 rental apartments — 130 studios, 180 one-bedroom, and 40 two-bedrooms — and 50% of all units will be affordable to low- and middle-income households. It will also contain 4,000 square feet of retail space and 20,000 square feet of arena storage. SHoP Construction is responsible for design and construction services, Arup serves as structural and mechanical engineer, and X Site Modular is the modular consultant. The building is designed to achieve LEED Silver. Construction is expected to start in early 2012. BLDG 92 at the Brooklyn Navy Yard.

BLDG 92, a new visitor’s center and exhibition space at the Brooklyn Navy Yard, will depict the history of the site, from its time as a naval shipyard to its rebirth as a center for artists and green manufacturing. Beyer Blinder Belle Architects & Planners in collaboration with workshop/apd designed the adaptive reuse of what was once the commandant’s house. Built in 1857, the 9,300-square-foot building underwent extensive structural stabilization, exterior restoration, and interior rehabilitation. A new 24,000-square-foot addition connected to the historic building via an atrium is a contemporary interpretation of the industrial surroundings. The addition will provide space for meetings, and features a rooftop café and an employment center. The entire facility is designed to achieve a LEED Platinum certification. The Navy Yard is currently undergoing its largest expansion since WWII, adding approximately 1.6 million square feet of new space Institute for Computational and Experimental Research in Mathematics (ICERM).

Architecture Research Office (ARO) recently completed the Institute for Computational and Experimental Research in Mathematics (ICERM) at Brown University in Providence, RI. The facility is the newest of eight National Science Foundation Mathematical Sciences Research Institutes, and is the only one in New England. Located on the top two floors of a downtown tower, much of the existing partitions and layout were preserved. The 104-seat lecture hall is the heart of the space and features views of downtown on three sides. The fourth wall is a writable surface of translucent glass panels inset with two suspended projection screens. This floor-to-ceiling surface is a double layer of illuminated glass, allowing daylight to filter into ICERM’s central lounge, and produces a glowing connection between the lecture hall and the lobby. Furniture was selected to maximize group collaboration, and conference rooms are equipped with Smartboard and video-teleconference technology.

The Natural History Museum of Utah recently opened the 153,000-square-foot Rio Tinto Center, designed by Ennead Architects. Located on 17 acres, the $103 million museum is nestled in the foothills of the Rocky Mountains overlooking Salt Lake City. With 42,000 square feet of copper cladding and a roofline that rises and falls with the contours of the terrain, the building was also designed to cause minimal disruption to the environment. The museum contains more than 41,300 square feet of gallery space, including a 60-foot-high central public space that separates two wings. One wing contains research laboratories, conservation labs, collection storage, and administration, while the other houses public spaces for thematic galleries. The museum is seeking LEED Gold certification and features the use of recycled materials, local resources, photovoltaic energy, radiant cooling, and an extensive stormwater catchment and management system. Salt Lake City-based Gillies Stransky Brems Smith Architects (GSBS) served as architect-of-record, and the exhibitions were designed by Ralph Appelbaum Associates (RAA).

Kigutu Builds Sustainably Off the Grid Construction is set to begin on a 20-bed staff residence for Village Health Works, in Kigutu, Burundi, a landlocked, densely populated country in East Africa. Designed by Louise Braverman, Architect, the 6,000-square-foot residence is located in a community that is 100% off the municipal grid and will be powered exclusively by a solar farm. Sited partially below grade and in alignment with the ground contours, the building takes advantage of the earth’s natural insulation for temperature control. Kigutu’s outdoor communal culture has been adopted in the building’s design — oversized porch doors are used to seamlessly connect the outside with a series of interior public living spaces. Extended roof overhangs will optimize natural daylight, and cisterns will capture rainwater for irrigation. Perhaps the most sustainable feature of the project is that members of the community will manually build the residence from local bricks and stone, thus negating the use of fuel-consuming machines and creating transferrable job training skills. This is the first phase of a master plan designed by the firm for the 40-acre site.

A Tower Rises in the East Construction is scheduled to begin in early 2012 on the Renaissance Tower, a 36-story office building, designed by FXFOWLE, located in Istanbul, Turkey. The tower is sited at the intersection of two major highways so it can be seen in the round. Functioning like an obelisk, the sculptural massing of the 947,000-square-foot building takes cues from Ottoman geometric motifs and local landforms. The tower is rotated 33 degrees for optimum solar control, and features a solar-responsive stippled golden scrim attached to its curtain wall. Three groupings of two-story “sky-gardens” are strategically integrated at key exposures to provide a thermal buffer between exterior and interior. A larger exterior garden crowns the tower while the base of the building features retail, gardens, and a piazza.

Cook+Fox Architects is designing a building near Herald Square that will house PUBLIC New York, a 16-story hotel. Construction is expected to begin in the spring of 2012.

The Institute of Multidisciplinarity for Art, Architecture and Design presents “[global] Crisis & Design ver.1.0: Living in the Crisis Era, between Anxiety and Desire,” an exhibition featuring works by Columbia University students and alumni from various disciplines — urban planning, architecture, landscape, fashion, graphic design, and interactive technology design. The exhibition is on view through 12.03.11 at the Artgate Gallery in Chelsea.

On-and-off plans to build a 40-story tower above the Port Authority Bus Terminal, designed by Rogers Stirk Harbour & Partners, appear to have been dashed.

EASTON+COMBS is collaborating with fashion design company Ohne Titel for the fifth installation of BOFFO Building Fashion‘s five part series that pairs fashion designers with architectural designers. The installation will be on view from 12.01-14.11 at 75 Walker Street.